Society for the History of Sciences and Technology 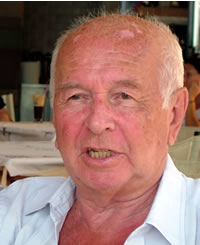 Luboš Nový studied the mathematics and physics at Charles University in Prague and in 1953 defended his dissertation about The Bolzano’s logic. In 1956 he became head of the Department of Science and Technology of a newly founded Historical Institute of the Czechoslovak Academy of Sciences where he had been working until 1985. His Ph.D. dissertation from 1957 was devoted to the textbooks of practical geometry used in the Czech lands in the 1st half of the 18th century and also to the general state of mathematics in the 2nd half of the 18th century, and to the foundations of mathematical analysis by the Bolzano’s contemporaries.

His effort to concentrate numerous scientists to the systematic study of the history of their branches was supported by the Czechoslovak Society for the History of Sciences and Technology, whose chairman he was for many years. The Society was characterized by many important activities and publications. From 1968 to 1989, Luboš Nový was editor in-chief of the journal History of Science and Technology (Dějiny věd a techniky) and sat on a board of some other historical periodicals.

Under his leadership the book History of Exact Sciences in the Czech Lands in the End of the 19th Century came out in 1961. His attention turned then to the problems of group theory as a result of the previous development of algebra. His book Origins of Modern Algebra (1973), which is a top of his studies, caused great interest and became essential for his title Doctor of Historical Sciences (1977). In 1979 Jaroslav Folta and Luboš Nový published together an encyclopaedia called History of Natural Sciences in Data and contributed significantly to the publication of the team work History of Technology in Czechoslovakia (1974).

From the beginning of 1980s he was interested mainly in general problems of scientific revolutions, formation of the scientific branches, role of the nationalism in the scientific development at the beginning of the 20th century, science as a form of a social communication, problems of general, territorial and national development of science, history of scientific institutions, aspects of the broad concept of sciences as a social process interacting with the life of society.

In 1985 Luboš Nový was appointed director of the Central Archives of the Czechoslovak Academy of Sciences. There he organized besides the archival work a scientific research of the history of the Czechoslovak Academy of Sciences and its predecessors. In 1989 he had been retired, but published many articles and had been studying in the long term the development of algebra of the epoch following that of his book Origins of Modern Algebra. His latest studies were aimed at Luca Pacioli’s work Summa de Arithmetica, Geometria, Proportioni et Proportionalita, yet unpublished.